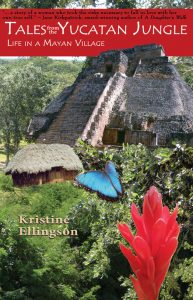 I admit to having a certain number of prejudices. Had I not exchanged emails with Kristine before knowing about her book, Tales from the Yucatan Jungle, I probably would not have read it. In our discourses I intuited that she is a sincere person who is much different than the type of expat who moves TO Mexico, but not INTO Mexico. It was soon apparent to me that she knows a lot about Mexico in general and her own corner of it in particular. Sadly, I find that rarer than you would think among expats.

My background is that I have knocked about Mexico since the 1960’s, lived there in the 1980’s and made a living writing about her since the 1990’s. During all this time I have studied the country by reading and most importantly by keeping my ears and eyes open while meeting and getting involved with Mexican people. I have published a dozen or so books on Mexico from travel to an attempt

to explain Mexican society to my own countrymen (Modern Mexico Through the Eyes of Modern Mexicans, University of Texas, Pan American Press).

I have read a lot of books written by expats who moved to Mexico. Most of them are more about the gringos / gringas than they are about Mexico or the Mexican people. They usually include humorous anecdotes about language differences, entertaining and wise gardeners or other servants, gossip about the villagers and how the authors were “accepted” into the local society (often becoming godparents without knowing what that entails), even though they learned very little during their isolated life of comparative wealth in their gringo communities.

Kristine not only moved to Yucatan but lives in a village with her Mayan husband. When she says she was accepted into the society, she is telling the truth. It is not that she was accepted – it was that she earned the right to belong. Of course she expressed it differently.

Years later I thought that maybe the village accepted me, kept me around, for entertainment purposes.

I was struck by one chapter title (12): Some Things I Cannot Explain. How true for anyone writing about Mexico to say. How honest for the author to admit.

I won’t ruin the book for you, but give you some snippets I found particularly appealing.

Self-discovery and fitting in.
Sometimes my attitude and sense of quote what is right was just plain incorrect. So maybe you do not know what is best all the time, maybe your way is not right for living in a Mayan village, and you take a long hard look at yourself. You may not always like what you see but you can also get some happy surprises.

Honest comment about the leakage of her culture to the Mayans she lives with. Anthropologists are so very aware of this.
I did not come here to change people, nor teach them my language and customs. I came to live among them and to absorb their way of life as much as I could. But it has not quite happened that way. Things sneak in, things like different manners, and hygiene, and logic I did not realize I was teaching in a different way, but I was.

How being different can be useful.
You have to look for clues as to who you really are. What used to be rather dubious abilities in the past might now be useful skills. Instead of hiding some of the things you know how to do, you can be free to use. You can get comfortable with yourself

The author tells a little bit of her own life before coming to the village, using it to weave into how it helped or hindered her from fitting into the village life. She tells just enough about herself to set the stage, but not so much as to make the book about her. Good job.

Bureaucracy
Anyone who has spent much time in Mexico has at least one tale of bureaucracy gone mad. Kristine does a good job of telling the story of the difficulty of getting married and points out that half her bureaucratic troubles came from the American consulate which was especially unhelpful. That is balanced reporting.

Delinquency
The story about Santiago’s out-of-control son and his rehabilitation is very good. It also points out that evil ex-wives (Dragon woman, spiked heels, short, short skirt ….) come in all nationalities. That is something you won’t see in your average expat’s book.

Of course there is much more. Kristine covers not only life in the village, but death and birth as well. She is observational and true about the changes and challenges brought by the Chedraui supermarkets coming near. She does the same with the effects of the migration of men from the village to work in the USA. She touches on how this changes the village and the society. This is a dear spot to me because it was touched on by nearly every Mexican I interviewed when researching my book on Mexican society. I talked to people from all over the Republic and heard the same stories that she tells of Mayan villages. It is a national problem. I respect that Ms. Ellingson was not so arrogant as to present her idea of a solution. Neither did she get on a soapbox for or against the issue of immigration. That is one more thing that sets her book apart from others in a similar genre.

So, overall, there is a lot to like about this book and I have not touched on half of it. Read this book. Then go to the author’s bed and breakfast and see for yourself. Not all of us can, or should, move to a Mayan village. But we can help to support such places by enlightened tourism.

About the reviewer: “Mexico” Mike Nelson has been writing about Mexico since the 1980’s with more than a dozen published books to his credit, from travel to humor to social history. The New York Times, the Wall Street Journal and Contenido (Mexico) have profiled him and his work. Two of his in-print books are Live Better South of the Border and Modern Mexico Through the Eyes of Modern Mexicans. He has also published 3 books on psychology/self-help and his works have been translated into Japanese and Korean. His current passions are cartography and encouraging people to discover off-the-beaten track Mexico. For more about him, see his web site www.mexicomike.com.

Find out more about Tales from the Yucatan Jungle.